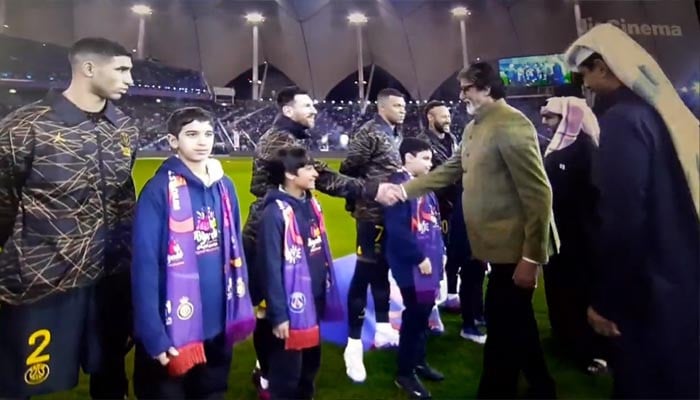 Ahead of the much-awaited match between Lionel Messi-led Paris Saint-Germain (PSG) and Cristiano Ronaldo-led Saudi All-star XI match at the King Fahd International Stadium in Riyadh, football fans from the subcontinent witnessed an exciting surprise as Bollywood superstar Amitabh Bachchan arrived with Saudi dignitaries to greet the teams.

Before the match began, as the teams lined up, Big B arrived at the stadium and basically lived the dream of every football fan in the current generation.

Flanked by two Saudi dignitaries, Amitabh walked to the field and shook hands not only with Messi and Ronaldo but with players of both teams, including fan-favourites Neymar and Kylian Mbappe, who are both playing for PSG.

Bachchan’s presence in the stadium took everyone by surprise and fans who adore both football and Bollywood went wild.

True to form, the Twitterati jumped onto the microblogging platform to share their excitement and exuberance.

While another said: “My eyes [heart emoticons] Amitabh Bachchan meets Ronaldo [and] Messi.”

It must be pointed out here that the exhibition match has been much hyped and awaited by fans because it brings Ronaldo — who signed for Saudi Arabia’s Al-Nassr this season — and Messi face to face once again.

Matches between teams featuring Ronaldo and Messi have become rare ever since the former left Real Madrid in 2018. They faced off at least twice a season before that as part of the El Clasico between Madrid and Barcelona, of whom Messi is the all-time highest goal scorer.

‘World dangerously unprepared for next crisis’