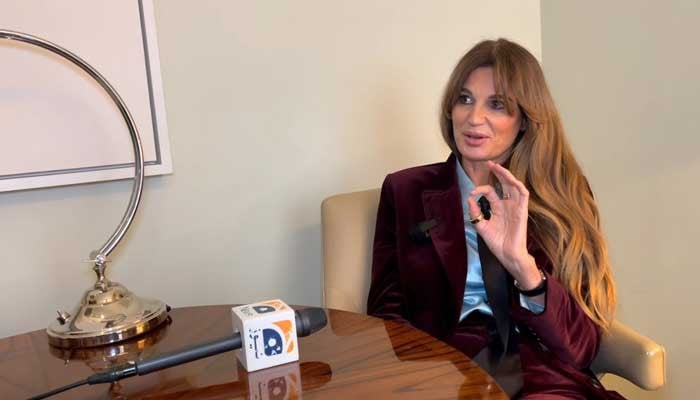 LONDON: British screenwriter and film producer Jemima Khan Saturday said she doesn’t need politics in her life, mentioning that she avoids discussing and taking part in political matters to stay away from “political fights”.

Jemima, the ex-wife of the Pakistan Tehreek-e-Insaf (PTI) Chairman Imran Khan, shared her views in an interview with Geo News in London, United Kingdom.

“I need politics out of my life. No politics,” she said, setting rules before the interview’s recording began to discuss her yet-to-release rom-com What’s Love Got To Do With It.

In the same interview, Jemima speaks emotionally about Pakistan and the 10 years she spent in the country as Khan’s wife.

Jemima told Geo News that she deliberately steers clear of political matters to keep herself out and away from controversies that come attached to politics.

Two weeks ago, Jemima and her brother Ben Goldsmith managed to raise over £150,000 for Pakistan’s flood victims in support of the United Nations International Children’s Emergency Fund’s (UNICEF) Pakistan Floods Appeal and the Pakistan Environment Trust.

The siblings hosted a charity dinner in central London last night with over 100 high-profile leading Pakistani and Indian personalities in attendance.

As a UNICEF ambassador, Jemima said she was helping to raise vital funds to support the children and families affected by the devastating catastrophe.

“The Pakistan Environment Trust, founded by my brother Ben, is working to combat climate change in a country that faces some of the most challenging effects of the global environmental crisis,” she added.

“What these two great causes need more than ever is financial support, so Ben and I are pleased to be able to raise awareness and much-needed funds for the people of Pakistan,” she said.